We recently conducted our annual candidate survey, in which we ask our user base about their experience with the campus recruiting process. Their responses provide insight into the personal experience of MBA recruiting, and we use this feedback to improve the user experience on our platform and to prioritize the development of new software functionality. Each year we also share some of the most helpful conclusions with our audience as part of our mission of making the recruiting process successful and enjoyable for all stakeholders. What sort of recruiting experience did the classes of 2019 and 2020 have this past year? Read on to find out.

83% of our respondents were enrolled in a full-time MBA program during the past year’s recruiting cycle, with the remainder distributed across part-time MBA, executive MBA, and other graduate business degrees. The median reported age is 29 years old. 46% of respondents identified as female, and 36% were international students who are or were seeking visa sponsorship. 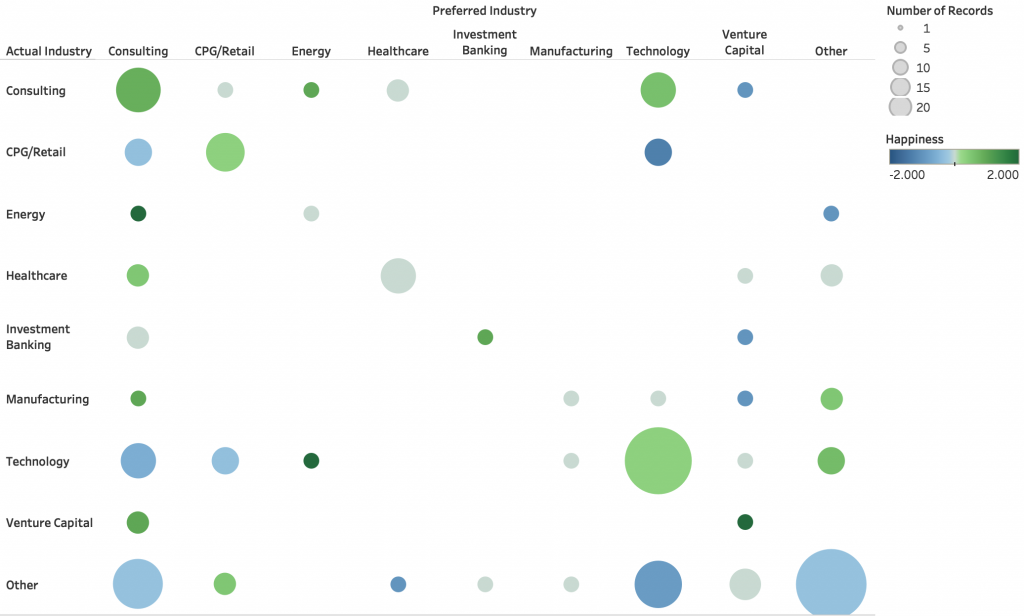 This particular data on recruiting satisfaction is perhaps unsurprising, but it contains an important insight for candidates entering the MBA job market: you are likely to be better off if you receive an offer in your first-choice industry – so carefully consider which industry to prioritize. While they are popular targets, recruiting for industries like consulting and private equity is highly competitive and respondents to our survey reported a high failure rate. 65% of respondents who had consulting as their first-choice industry ended up accepting offers in a different industry; for Private Equity, the rate was 75%. For some candidates this sort of risk is tolerable, but all candidates should be aware of the risk and ask themselves whether they’re prepared to go through the networking and application process in more than one industry.

Time Commitment During The Recruiting Process

The primary downside of failing to receive an offer in your desired industry is that graduate business school recruiting takes a lot of time: Class of 2020 candidates reported spending an average of 8.7 hours a week on recruiting activities (company briefings, networking calls, research, applications, etc.). With a reported average of just over six months between their first recruiting activity and their last, first year MBAs can expect to spend a total of 226 hours on recruiting activities over the course of the school year. Because of their previous experience and existing network, second year MBAs reported a slightly lower but still substantial average of 156 total hours spent recruiting.

As far as the overall length of the recruiting process, candidates should prepare for a roughly six-month process. Among our respondents, the average Class of 2020 member spent 6.6 months recruiting, while Class of 2019 members spent 5.1 months. Again, there is a strong correlation between the length of the recruiting process and candidate happiness, with 76% of respondents who spent less than six months on recruiting reporting that they were happy with the experience, while only 47% of those who spent more than six months were happy with their experience. This is reflected in the chart below, which shows candidate happiness as a function of the start month (y-axis) and final month (x-axis) of recruiting activities. Green circles represent happy candidates, and are blue circles are unhappy candidates. As you can see, those who finished in April or were still seeking employment at the time of the survey are the least happy group, and their unhappiness is more pronounced the earlier they began recruiting. 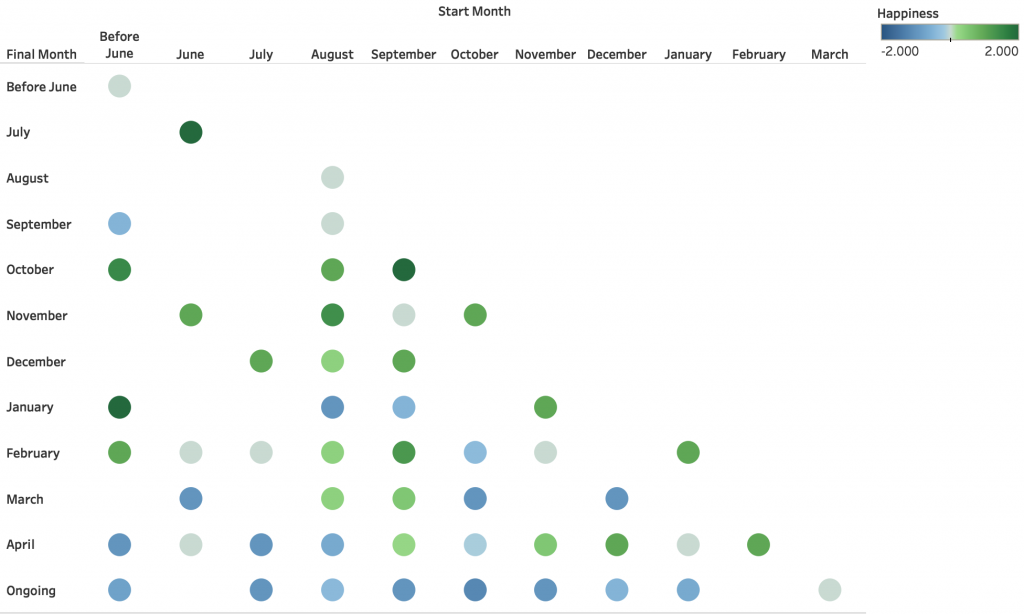 In general, however, an earlier start to recruiting is actually a boon to happiness because it tends to produce better outcomes overall. For the Class of 2020, in fact, 80% of candidates who started recruiting in July or earlier were happy by the end of the process; only 44% of those who started after July were happy with the process.

How To Ensure The Optimal Recruiting Experience

There are a few practical lessons for MBA candidates to take from this survey data, several of which have been highlighted above. The best practices suggested by our analysis are as follows:

As stated earlier in this report, a graduate business degree can be a tremendous asset in any job search, but it’s far from a guarantee of success. Incoming and current students should be strategic and deliberate in planning their recruiting targets in order to make the most of the “firehose of opportunity” afforded by the degree they’re earning.